This evening the students of this year's fire academy finally had the opportunity to experience some live fire training as part of their fire control skills classes. This fire included brush fire...
➜
New Powhatan and Amelia Firefighters

On February 26th the newest class of firefighters began thier training at the Huguenot Volunteer Fire Department. Today was thier first day in personal equipment and SCBA. These 13 students will com...
➜
News
NFA STICO Class

On November 19th and 20th the Huguenot Volunteer Fire Department hosted a National Fire Academy Strategy and Tactics for Initial Company Operations class. The program was taught by Joe Bailey and Wally Burris. This class was for new, seasoned, and aspiring officers. This class revolved around building construction, tactics, fire behavior, and the application of new firefighting tactics - specifically the SLICE-RS concept.

Members from Huguenot VFD , Powhatan VFD, Goochland Fire Rescue, Richmond Fire, and Powhatan Fire Administration attended. we all had a great time and learned things (not to mention ate healthy and well). 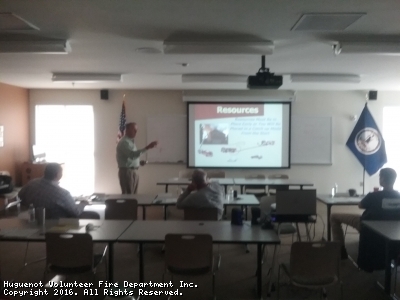 ×
1 of 72 of 73 of 74 of 75 of 76 of 77 of 7
124 entries in the News
2020 Officer's
Happy New Year! Thank you to those who served as officers in 2019. The 2020 Officers are as follows: Ryan Burk - ChiefTim Lawson - Assistant ChiefTroy Blair - CaptainJames Sullivan - CaptainDavid Burton - LieutenantChanning Ward - Lieutenant
➜
2019 Officers
Now that 2019 has arrived, we want to take the time to thank all those who served as officers in 2018. Serving this year as officers are:Neil Spier - LieutenantBrandon Johnson - LieutenantRyan Burke - Captain, TrainingTim Lawson - CaptainMike Lecik - Assistant ChiefTroy Blair - Chief
➜
Powhatan Fire Academy 2018

This evening the students of this year's fire academy finally had the opportunity to experience some live fire training as part of their fire control skills classes. This fire included brush fires, car fires, and dumpster fires.
➜
New Powhatan and Amelia Firefighters

On February 26th the newest class of firefighters began thier training at the Huguenot Volunteer Fire Department. Today was thier first day in personal equipment and SCBA. These 13 students will complete thier training and be released as trained members June 2nd.
➜
The next generation of EMT's

Tonight, Powhatan started the Spring 2018 EMT class at the Huguenot VFD in partnership with ODEMSA. Although not all Powhatan providers, the attendance of our members is strong. This is a cutting edge program that is delivered in a hybrid format with the lectures done online and skills done at the ...
➜
2018 Officers
Congratulations to members elected or appointed as officers for 2018Operations:Chief - Taylor GoodmanAssistant Chief - Mike LecikAssistant Chief - Tom BerryCaptain - Tim LawsonCaptain - Jordan FisherLieutenant - Neil SpicerLieutenant - Troy BlairLieutenant - Brandon JohnsonAdministration:President -...
➜
National Fire Academy Class

This week the HVFD hosted a National Fire Academy Leadership in Supervision 1 class. The program was 16 hours and concluded on Saturday the 18th of November. The program was taught by Instructor Sam Burnette a long time fire service member from several organization's in Virginia.
➜
HVFD CPR

This evening Captain Berry and Instructor Johnson delivered CPR for existing and prospective members of the company. In addition to being a requirement for all members, it is important that our members know how to do this task well to provide services to the community.
➜
Flat Rock Elementary School Carnival 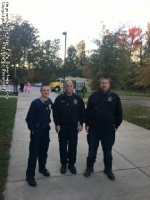 This evening members Neil Spicer, Chris Corcoran, Denver Bonham, Tom Berry, and Mike Lecik assisted FRES with their annual carnival by providing lighting and personal support to help make the event as good as it could possibly be.
➜
HVFD EVOC Class

Over the last week instructors Cosner, Spicer, and Berry taught EVOC to members of our department and a couple of guests from Caroline who desired to begin driver training on emergency vehicles. Once on the driving range Neil Spicer and Chris Corcoran stayed busy assisting with instruction as well....
➜
Customer Service and Command Symposium 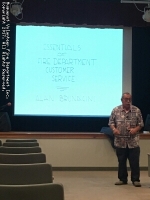 Members from the Huguenot VFD and around the Commonwealth traveled to Petersburg in Early October to listen to some of the biggest names in the Fire Service give us thier take on Customer Service and Command.
➜
Labor Day Cleanup

On Saturday September 2nd members of the Company participated in our regular cleanup of apparatus in preparation of the Powhatan Labor Day Parade to be done on Monday. Time was spent both cleaning and performing routine maintenance.
➜
HVFD Hosts Blended Learning EMT Class

Tonight the Huguenot VFD began hosting a blended learning Emergency Medical Technician class in partnership with the Old Dominion EMS Alliance. Powhatan has 4 members in the class. This class is primarily delivered online with only the practical sessions being delivered in a traditional format.
➜
HVFD Supports School Rodeo

This weekend the volunteers at the Huguenot VFD assisted the Powhatan School Rodeo program by providing a Emergency Medical Services Standby in case of injuries (luckily no assistance was needed). This event is held annually at the Gitts Farm on Rocky Oak Rd.
➜
New Tanker Placed in Service

After the completion of drivers training, equipment mounting, and vehicle familiarization, new Tanker 2 was placed in service on Sunday, July 9th. The new tanker features a 1250gpm pump, 2500 gallons of water (700 more gallons than our older one), and seating for four.
➜
Members & Officers Recognized for Training Accomplishments

Firefighters have about a 40% greater chance of occupational cancers than other workers. This can be devastating to the individual, thier family, and others in the Fire Service Brotherhood.Today, the Huguenot Volunteer Fire Department wanted to support a fire service family member that is fighting ...
➜
Huguenot's FF Alyssa Howland graduates Hanover Fire Recruit School

On November 19th and 20th the Huguenot Volunteer Fire Department hosted a National Fire Academy Strategy and Tactics for Initial Company Operations class. The program was taught by Joe Bailey and Wally Burris.
➜
1 of 72 of 73 of 74 of 75 of 76 of 77 of 7
124 entries in the News
Picture gallery

- Include this Tribute Box:
?? On Your Website
- Ways to Honor Fallen FFs
- Share a Memory on the:
?? Remembrance Banner
- For More Visit:
?? Weekend.FireHero.org

This site has been viewed 636,862 times.
Calls
News
Events
Pictures
Apparatus
Maintained by the members and staff of Huguenot Volunteer Fire Department Inc.. Designated trademarks and brands are the property of their respective owners. Copyright © 2006-2022. YourFirstDue Inc. All Rights Reserved. Content on this web site is supplied by Huguenot Volunteer Fire Department Inc.. YourFirstDue Inc. cannot be held responsible or liable for any content, text, pictures, or any other media found on this web site.
Management login
Powered by